Cellar Jaume de Puntiró was founded in 1980 by Jaume Calafat i Nadal. Currently, his sons Pere and Bernat Calafat i Vich run the winery and produce classic Mallorcan wines emphasizing local grapes, all harvested from their registered ecologically tended vineyards. It is, in fact, the oldest certified 100% organic winery on the island, and they produce around 40,000 liters annually. 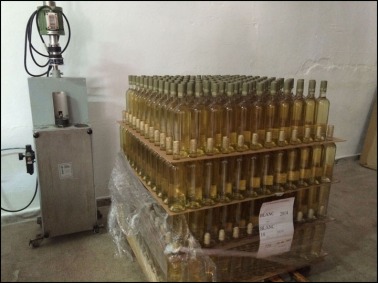 The family has owned vineyards for decades, always growing and harvesting by traditional methods. All their grapes currently come from the seven vineyards they own in the Santa Maria area; and all production is done on site in their Santa Maria del Cami facility on Plaça Nova. Their clients are mostly Mallorcan, with 20% of their bottled wine exported to Denmark, and 5% to Germany. The name Puntiró comes from an area from which the paternal family came. The winery is distinguished with the Carta de Mestre Artesà, and the Document de Qualificació Artesanal. They belong to the Consell de la Producció Agrícola Ecològica de Balears, and the Consell Regulador de la Denominació d’Origen Binissalem-Mallorca.

It was a scorching July afternoon when Pere (Peter) Calafat i Vich opened the locked front door for us and we asked if a tour and tasting were possible. He grinned and waved us in “Sure! It’s all here, the whole production; we are only missing the grapes!” He introduced himself, and then said with a big smile that he is both the President of Cellar Jaume de Puntiró, and the sweeper. Pere does not speak any English. No matter, we enjoyed a wonderful tour of the small production facilities, and he told us that come September, all the front area tasting and sales decor leaves, and the grapes come in the door and own the place! 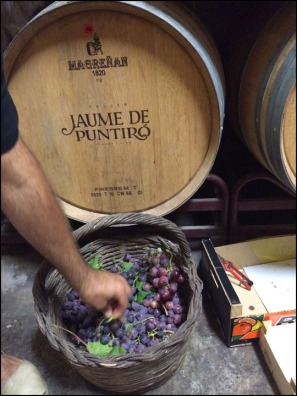 He told us that his grandparents on both sides of the family grew grapes before and since the Phylloxera blight, and they were always ecological because it was the only option in the past. Today, they do not use herbicides to kill weeds or toxic chemicals, and use only natural products to control molds and fungi. They follow strict ecologic guidelines of what you can or can’t use; he told us that the natural products are much the same today as the family used before chemicals became available. They feel strongly about their vines, wines, and clients, and carefully tend their vineyards accordingly.

They grow eight varieties of grapes in their five vineyards: Their reds are Manto Negro, Callet, Cabernet Sauvignon, Syrah, and Merlot, which they age 12-24 months in oak barrel; and their whites are Prensal Blanc, Giro Ros, and Muscatel which they generally age 6 months in oak barrel or steel tank. Pere said his grandfathers and father made one red wine, which they sold from the cask and never bottled, whereas now Cellar Jaume de Puntiró makes two full lines and sell both from cask/tank and bottles. All the grapes ferment individually in a tank and then they are blended as desired, except for the JP wine where the varietals are fermented together.

Pere told us that one has to understand the nature of each grape to make a good wine; for example, in his opinion, the Callet grape make a good 100% Rosado, but Callet 100% red is not as good: it is nicely aromatic, but lacking flavor strength and structure.  On a related note, we learned that technically a Coupage is where you take a trusted wine like Cabernet Sauvignon and cut it into wine made from a grape varietal that needs bolstering for any reason (i.e. color, tannins) like most wineries do with Callet and Manto Negro.  So a coupage is a blend with a specific supportive role.

The winery has a close link to the arts and music. Not only having artists paint their Crianza line labels, but also they have concerts and poetry readings in the winery. We love the idea of serenading the grapes as they ferment and mature! On their FaceBook page it shows they had a Glosses competition, which is the traditional chants that they sing at the fiestas Sant Antoni. They even have a symbol that represents each bottle- Pere says it is the Puntiro Alphabet. They bring a lot of creative arts into this bodega!

We quickly found ourselves chatting with Pere like old friends.   He told us that the family tradition of naming continues:  Jaume the grandfather, then our Pere, and he has named his son Jaume — We are thinking perhaps the future owner?!  Pere happily shared facts about their production, telling us they use only American and French oak barrels, and that the same wine aged in barrel becomes “golos,” or rich, and without barrel is bright and refreshing. He also told us that nowadays, most Mallorcan wine goes to German clientele on island and as export.

We asked him about how they temperature control their steel tanks in such hot weather, and he told us that the stainless tanks are fine in an above-ground hot room now because they are empty, otherwise they air-condition the room in addition to temperature controlling the tanks. He guesses the tanks we saw outside at Macia Battle and Pere Seda are not filled until the day temperatures are low enough that the solar heat doesn’t affect the temperature-controlled tank interiors. Ah ha! We’d been worrying about that!

As we were leaving, bottles in hand, Pere showed us the old rust-colored pine bough hanging outside over the front door. He told us that a pine branch in front of an entrance is a centuries old symbol indicating that wine is made there! A new pine bough announces when the new wine is ready each year. This lovely dried one was still here from last November!

As you drive into the town of Santa Maria from the highway, you will see a sign for the Urgencias PAC  on your right hand side. Follow this sign and you will come to the main square called Plaça Nova. Jaume de Puntiro is there. You need to drive all the way around the square since it is all one-way roads. 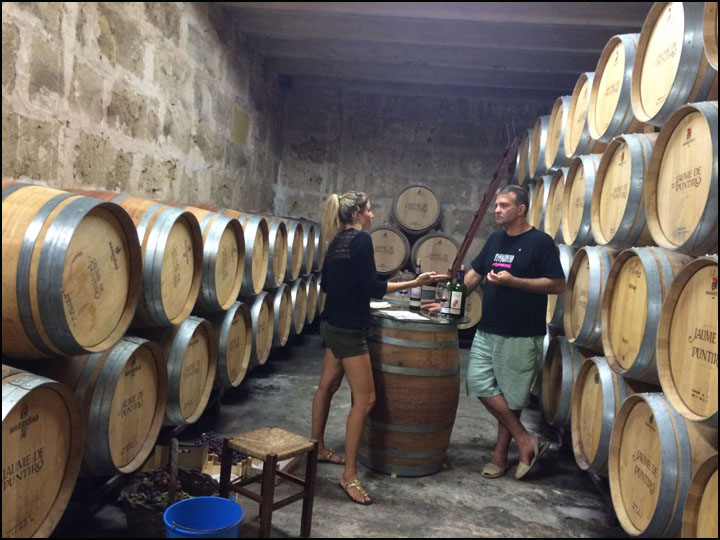 Jaume de Puntirò is the oldest certified organic wine maker in Mallorca. Their wines are bursting with character and values. They have 2 different lines of wine: their normal selection and a Crianza line with artistic labels, plus a special red and sweet white. Most of the wines are named after colors in the Mallorcan language, and they each have their own symbol that represents that wine and is known as the Alphabet Puntirò; a beautiful blend of creativity and wine.

Tawnee: A very vibrant wine! It is a pale color of yellow. There are notes of fruit, and it has a delicate finish. A young white wine made from white grapes – named appropriately – Blanc is white in Mallorcan.  Perfect for a fruit salad or a salad with nuts.

Merie: Blanc 2014 is a blanc de blanc (white wine made from white grapes) made from 100% Prensal Blanc. This tasty wine has a beautiful, sweet aroma, with bold flavors consistent of a young wine. It is refreshing, dry and tart like a green apple, very even and fresh.

Tawnee: A delicious sweet wine – I bought a bottle immediately! There are floral aromas. It is very balanced and has a wonderful honey finish. An excellent end to a summer meal!

Merie: The Muscatel Dolç 2012 is a lightly sweet wine aged in oak. The aroma is not sweet, but full and interesting! The taste is lovely! There is some sweetness but it is not sugary. It is a very light, refreshing wine and perhaps my favorite here. 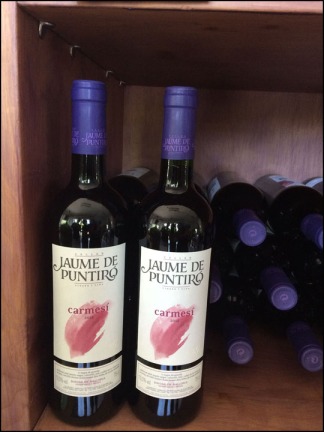 Tawnee: A good blend of traditional Mallorcan grapes and a solid Cabernet. Crimson in color, just like the name states. The Mallorcan earth tones are definitely notable. This is a good organic table red to have around the house.

Merie: Next Pere poured us the Carmesi. Like the name, it is crimson red in color. The flavor is oaky, as well as lightly tart. I was told that winemakers like a bit of acid in the right proportion, as it promotes salivation = mouth-watering!  This wine is a blend of Manto Negro, Callet and Cabernet Sauvignon varietals, and aged 12 months in American oak barrels. 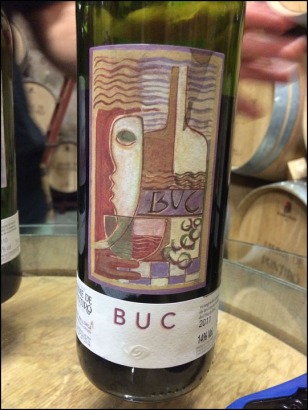 Tawnee: A spicy wine! This comes from the Crianza artistic line. I personally did not enjoy the nose on this wine very much, but the flavor was dynamic and enjoyable! It was earthy and spicy. Good with a rack of lamb or grilled goat.

Merie: The Buc 2011 is made from a blend of Manto Negro and Cabernet Sauvignon grapes from older vines. The name Buc comes from the region the grapes are grown: Es Plà de Buc. It is a 12 month Crianza, aged in American oak barrels. Pere described it as “fuerte y duro.” Strong and intense, it has aromas of pepper and cinnamon. This wine has personality!

Tawnee: A bold wine! The nose is full of spice and earth. Drinking it is very easy as it is well balanced. It would be great with braised beef or a shoulder of lamb. It is from the Artistic line of Crianza wines.

Merie: The last wine we tried was the Porprat 2012. Porprat means purple in Mallorquin, and is named for the deep color of this blend of Manto Negro, Prensal Blanc, Giro Ros, and Callet Grapes. Note there is a white grape in this red wine!  That might be a first for us!  This is a rich, hearty red with strong aromas and flavors, and a good tannin structure.