“Where science meets wine – a Stairway to Heaven” 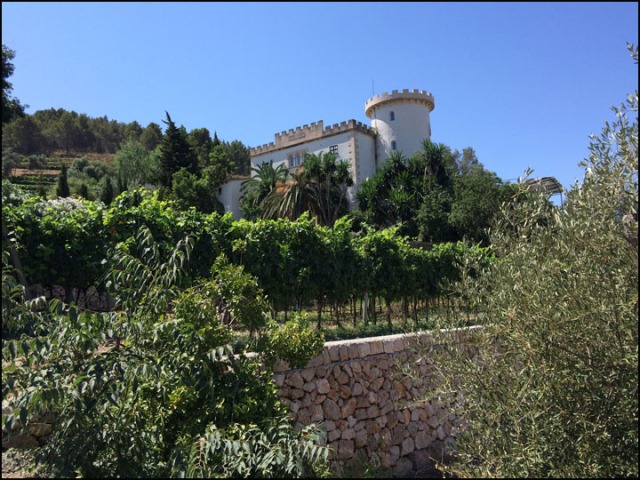 The Castell Miquel winery is owned and run by German pharmacist Professor Popp who comes once a month to oversee the winery. Founded in 1998, he started Castell Miquel as an inspired hobby, financing it through the success of his internationally known Bionorica Company, which produces high quality medicinal plant extracts here in Mallorca and in Germany. His first name is Michael which is Miquel in Mallorquin, and the primary structure on the former chicken farm is a castle-style home built by General Franco in the 1960s for his in-laws: hence the winery name Castell Miquel.

They currently produce 280,000 liters/bottles per year. There is clearly room for expansion, and plans to turn the old chicken factory buildings into Agrotourism accommodations. The winemaker is Tomas Wambsganss, and together he and Professor Popp produce wines with a focus on the strengths of each varietal. They grow grapes on site, and also have vineyards in Binissalem and Porreres. 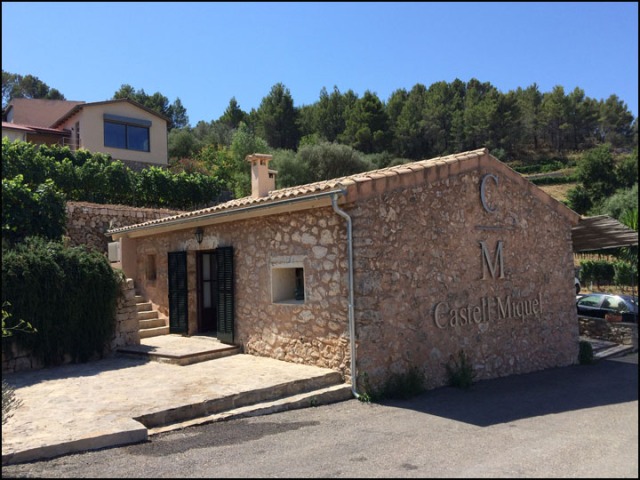 The undivided rural road to Castell Miquel leads gently up from the flat wine country, through old stonewalled farmland, to the southern foothills of the Tramuntana mountain range, and is one of the loveliest drives we’ve done so far. As we got out of the car in the hot Spanish morning, cicadas shrilled continuously. The place is enormous, ready for tour buses, the layout very Napa Valley while still using the traditional stone Mallorcan architectural design and terracing.

Most impressive is the outdoor tasting area with a spectacular view of the two picturesque mountain peaks of Castell Alaró. There are informative signs about their grapes and their process of wine making which are placed strategically for a tour or self-tour.

Arriving at the tasting room, we were greeted by Marta who cheerfully told us that they don’t give tours to groups under 10, that tastings are €5.00 per person, and that the first bottle bought after the tasting will be discounted that amount. We could tell that this winery is owned by a businessman, as their branding and marketing are fabulous. They have wine, olive oil, marmalades and colognes under the same brand.   Marta was just finishing another tasting, so to pass the time until our turn, she sent us on a lovely stroll through the vineyards and up to a vista point with a large piece by British sculptor Tony Cragg.  Art and wine paired again!

Savouring the view, and debating where to have our tasting, we chose the inside where we could talk more with Marta. Once there, she served us Miquel Castell black olive spread with Mallorcan Quely crackers, marmalade, olive oil, and fresh water to help our palates.  She then began to pour, saying that apples and olive oil help clear and neutralize the palate when tasting. Gesturing to their display, she told us that at Castell Miguel they currently produce 2 whites, 1 rosé, 3 reds and a Cava (sparkling white). Four of their wines are mono varietal, and two are blends. The Monte Sion line uses grapes from the Porreres Vineyard. The Stairway to Heaven line uses grapes from here at the Alaro Vineyard. The Cava grapes are from mainland Cataluña. This winery has a great website to consult for descriptions of each wine, and it’s fun to read their categories including “the origins of delight” and “what guides us.”

We asked Marta why the line is called Stairway to Heaven. She told us that Professor Popp sees the terraced mountainsides of the Tramuntana as stairs rising to the heavens – a lovely image! There is a story associated with the property – better described on the website – that an angel appeared on the land centuries ago and told the owner to plant grapes there. These terraces are the grateful stairway up. And of course Popp likes the song by Led Zeppelin! 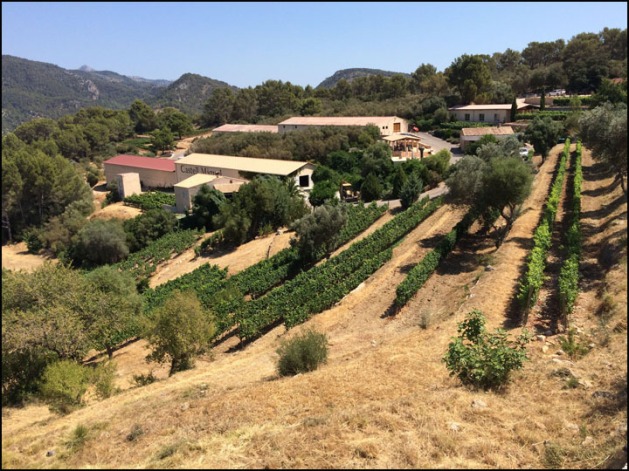 We chatted with Marta as she poured for us. She told us they use the standard copper, sulfur, and bicarbonate against fungi and mildew. She also spoke about oak fermentation, and told us that French oak barrels generally come from older trees, and have tight grain and pores, so the maturing process is slower. Hungarian oak is in the middle. American oak has bigger pores exposing the wine to more oxygen, which accelerates maturation. Here they use French and Hungarian oak barrels, often preferring Hungarian because of its tannins and flavors as well as the rate of oxidation. And they like the smaller, 225 liter barrels because of the ratio of wood to wine. They carefully filter their wine before bottling, and after corking they allow their bottle aging from six months to three years, depending on the wine. Their wines are sold at fine retail stores including the exclusive Corte Inglés, with 60% of their product exported to Germany. 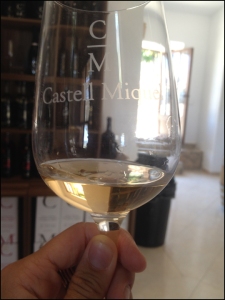 We learned that Professor Popp is a pharmacist who works with all organic botanicals with his company Bionorica, and that their products are sold in over 50 countries around the world!  So it is only natural that in wine making Professor Popp pays special attention to the grapes and wine’s health benefits.  Wine as medicine, historically accepted as fact, has now been scientifically proven. Castell Miguel ensures that their wine has the highest quality ingredients and process to maximize this important fact.

An interesting first for us is this winery’s use of glass corks or the Vino Lok system. It helps to preserve the freshness after the bottle has been opened, and slows the aging process in bottle because it isn’t porous like cork. Fascinating!

These are good, clean wines, and we are convinced that when paired correctly they are a complement to any table. That being said, we must say that overall we found them highly produced, consistently un-adventurous, and almost neutral and scientifically in the middle of the palate. We would not describe them as having outstanding character, nor greatness. They are unusually consistent wines that do not overpower.  So, it is a MUST that you come here and decide for yourself; the experience is a joy, and the wines are clean and good and unlike any other on our island.

When you get to the town of Alaró, follow the main road into the center of town. On the right hand side you will see a yellow sign for Castell Miquel. Turn right here and follow the signs weaving through the mountains on the back road to Ínca and Lloseta. You can not miss the Castell on your right! 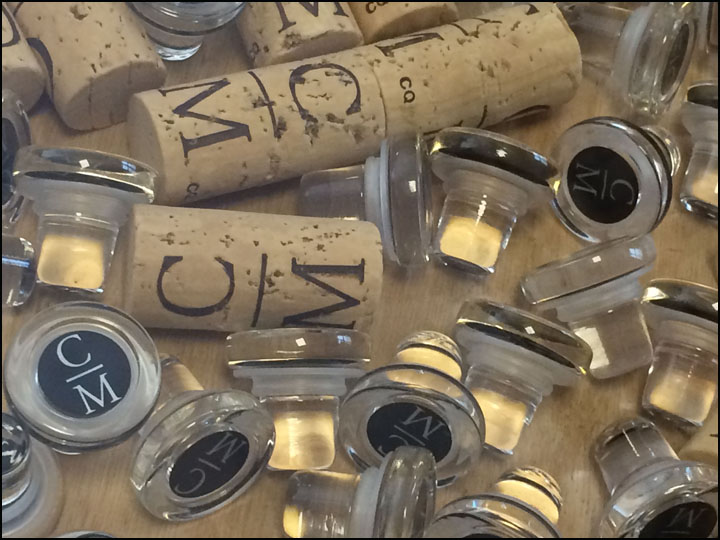 Castell Miquel’s owner Professor Popp is a successful scientist and his scientific search for consistency is a common thread in the wines. They believe that wine is medicine and we agree. Castel Miquel has consistent, non overpowering wines that are basically organically grown (awaiting approval). A unique experience up in the southern Serra de la Tramuntana mountains of Mallorca, this tasting room is beautiful both inside and out – overlooking the terraced vineyards and “castle.” It is a very unique experience. We enjoyed not only the wine at the tasting, but also the marmalades made at Castel Miquel. Another unique aspect of this bodega is the glass corks they use.  An unforgettable experience.

Tawnee: I love the uniqueness of tasting a white wine made from red grapes. This is a first in our Mallorca Wine Trail! The Monte Sion line from Castell Miquel is grown in Porreres, which is closer to the center of the island and flat lands. Blanc de Negre has a slightly tart taste. It is a stable wine with constant flavor from beginning to end. It would be a great compliment to a vegetarian dish.

Merie: Marta first poured the Blanc de Negre 2013.  It is 100% Monastrell grapes. The name literally means “white of black” and translates as “a white wine made from red grapes that hasn’t been allowed to steep with the red skins and thus the wine has no color.” No oak, straight from stainless tank to bottle, it has a lovely almost imperceptible pinkish hue. Slightly tart in scent and taste, with a flavor of good water; it is lightly thirst quenching.

Tawnee: Another first on our Mallorcan Wine Trail- Sauvigon Blanc. This was my favorite wine of our tasting! It has floral notes and a dry finish. It is easy to drink -solid and not too boastful. I could easily enjoy it with fresh crab or oysters!

Merie: The 100% Sauvignon Blanc 2014 is 12.5% alcohol by volume.   No oak, straight from stainless to bottle. More fruit and lighter, not sweet, fuller aroma went super well with olive spread and crackers.

Tawnee: The Stairway to Heaven line is from right outside the tasting room door – the terraces (stairs) of the mountainside. This is a rich colored rose – almost strawberry colored, which matches the nose on this wine. It has a delicious beginning, strong middle and a unique finish. It would be great with a salad full of ingredients and/or couscous.

Merie: The Rosado 2014 is made from a Cabernet and Syrah blend with a lovely rose color. No oak, straight from tank to bottle, with clear aromas of berry. I must say, the flavor was so much better after olive oil than after sweet marmalade, careful how you pair it!

Tawnee: Again a 100% wine – Syrah/Shiraz!  I always savor these opportunities to try and really understand the real nature of the grape. These Syrah grapes have been 12 months in Hungarian oak and 12 months in bottle before being put on the market. Consistent flavor with a beautiful color in glass. I would serve it with pheasant or turkey.

Merie: Next we tried the 100% Shiraz/Syrah grape.  12 months in oak, 12 in bottle. Great aroma, very balanced. At first I did not enjoy the flavor, I found it thin, then disproportionately strong oak flavors overpowering the subtle grape. However, Marta told me to dip a cracker in olive oil and clear my palate, and it really was SO MUCH better after!

Tawnee: My favorite grape – Cabernet Sauvignon 100%. This Cabernet had notable consistence and well balanced tannins. The most expressive of the wines at this tasting. Ideal to be paired with veal and buttered vegetables.

Merie: Lastly Marta poured the 100% Cabernet. At 14.6% alcohol, it has a nice aroma, balanced and rounded. At first I found the flavor almost scientifically “middle of the road,” and on the tart side, so I reached for the Olive oil.  After that, nice balanced tannins became obvious.  Interesting!

Note: Castel Miquel offers a Cava in their product line, but the cava grapes come from Cataluña and that’s not on our Wine Trail!