Finca Son Bordils was the first Winery we visited, and we both hold it as one of our all time favorite wine tasting experiences because of how much fun we had, how much we learned, and the door that it opened to a change in our lives.

Note: This blog entry is actually a fusion of two visits, one in April of 2014 when the magic first happened, the other in the summer of 2015 when we were on our personal Mallorcan Wine Trail and we had to go back with our new knowledge and further questions! 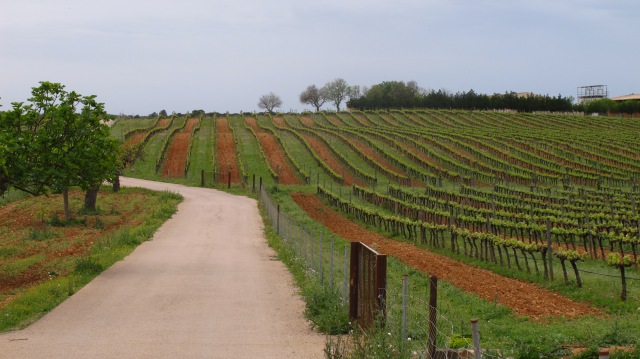 April 2014: The winery Finca Son Bordils, perched in the rolling mid-island plains outside of Inca, might be the oldest winery on the island – there is some debate. Founded in 1433 by D. Joan Bordils i Pont, the current owners are Ramón and Pedro Coll, and the Vineyard has been in their family for over 100 years. After the grape phylloxera plague, the family completely replanted 34 hectares of land with Chardonnay, Muscat, Prensal Blanc, Merlot, Cabernet, Syrah, Callet, and Manto Negro grapes, and built this beautiful and modern winery in the center, where we arrived for our tasting. They currently produce 150,000-200,000 liters/bottles per year, and are members of the Island organization Vi de la Terra Mallorca. These wines have character, and are consistently good and modestly priced.

When we arrived there, the marvelous owner Ramón Coll told us that unfortunately, the person who normally pours the tastings was out dealing with a personal matter. But as it happened, Jaume was there. He takes the Bordils wines to restaurants and pours for potential clients, and he kindly agreed to give us a tasting. It was the beginning of the serendipity and island hospitality that has been characteristic of our entire tasting experience and is part of what makes this wine region so marvelous to visit.

Mostly in Spanish we all got talking, and Jaume got pouring, and soon Jaume was telling us all about the history of wine on the islands, of trains from the interior island loaded with wine or grapes, going to the Cellars on the cooler coasts, and then out for export to mainland Spain and nearby France. He taught us about the phylloxera blight era in Europe and how Mallorca had almost 30 halcyon years when Mainland had the blight and Mallorca did not, and Mallorcan wines were in high demand and very lucrative. Sadly, phylloxera arrived in Mallorca in 1891 and devastated the island’s vineyards. He told us about the history of commerce in the Mediterranean, from when the Phoenicians were thought to have brought the first vines to the island in early BC, and wine cultivation began in earnest in Mallorca around 120 BC when Rome conquered Mallorca. We talked and tasted for what seemed like hours, enjoying unique wines from the back that are normally reserved for special clients: It was a Friday late afternoon, bottles were open which would be bad by Monday’s work day, so we enjoyed a generosity and friendship that might otherwise not have been available. 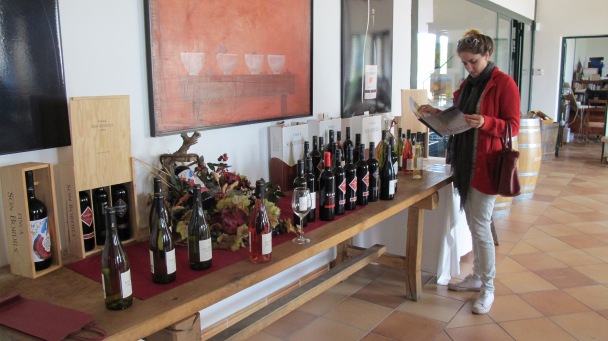 So you know, Phylloxera are sap-sucking insects, originally native to North America and related to aphids. They infect the grape roots and leaves, ultimately restricting nutrients and water to the vines. At this time there is no cure, but the rootstock that came from North America when Europe was replanted is resistant. American vintners had been given clippings of the famous European grapes, and grafted them onto American grape rootstock, with the great success of American wine industry today. In a graced turn of events, after the European Phylloxera plague, the American vintners brought back clippings from those same grapes, and resistant rootstock, and Europe was able to replant it’s own varietals. Jaume told us that there were 33,000 hectors of grapes planted on the island before the phylloxera blight, and that there are around 1,500 now.

Before we knew it, we had missed the opportunity to make Merie’s train! But, as kind fate would have it, Jaume was from the same town on the other side of the island, and he was headed home from work as soon as we were done! So off they went chatting happily in Spanish all the long drive home (fabulously challenging for Merie who is still learning!).

After that experience we were hooked, and the glorious idea of further self-educating and tasting at Mallorcan wineries was born. 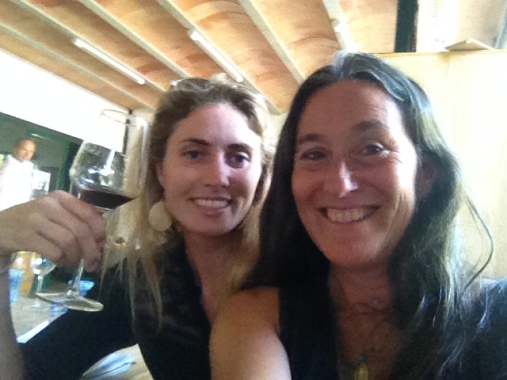 July 2015: We went back to Son Bordils in order to taste their wines again with our newfound interest in self-education. It was late on a Friday afternoon like last time, an odd coincidence. This time owner Ramón Coll poured for us so his normal Tasting Staff could go home on time. He remembered us, and that he and Tawnee are Friends on Facebook after our last visit!

Ramón is an amazing teacher and wanting to help us learn. When we told him that we are on a mission to understand wines, the first thing he said is that temperature is critical when tasting. A wine does not taste the same from one temperature to another, and tasting is for understanding the true character of the wine; different from enjoying a glass of wine where it inevitably warms in the glass and opens like petals of flavors. Every time he took out a bottle from the cooler, or had one out on the table from a previous pour, he checked the temperature of the bottle with his hand to ensure that his wines were at their best! Pouring our first white, the Blanc de Raim Blanc of 100% Prensal Blanc grapes — see tasting notes, below — he told us that Bordils is the family name of the founder who came to Mallorca from Girona in Mainland Cataluña in the 1200s with Jaume 1st (James 1 the Conqueror, in Catalan: Jaume el Congueridor). This family brought vines with them and started their production of wine in the middle of the island. 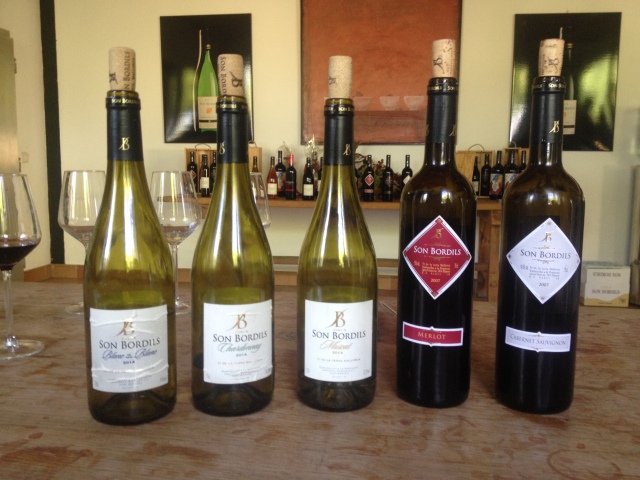 After only the first glass of white, Ramón said “You must see how it happens if you want to understand what is going on.” So, even though the bodega was at closing time on a Friday afternoon – he whisked us into working area to show us how it is all done. As we walked around the fermentation room, filled with shining steel tanks, he told us about the process. It has all to do with the yeast and sugar! There are two fermentation processes.  The first is called Primary Fermentation, which is the conversion of sugar to alcohol by the yeasts.  Secondary Fermentation (also known as malolactic fermentation) is when naturally tart malic acid is converted to lactic acid which is more mellow.  The yeasts come from the skin on outside of the grape. How much and the quality all depend on the land around it, the climate that year, and what you decide to put on your grapes. The yeast adds flavor to the wine and convert the sugars into alcohol, for every 17g of sugar= 1% alcohol. When all the sugar has been consumed you have a dry wine, not all consumed leaves what is known as residual sugars. He commented that this is one of the most difficult parts of the process, and sometimes the bodegas have to add yeast in the end to ensure that the whole process is finished to taste. Red wines generally ferment with seeds and skins to ensure color and tannins, generally whites are pressed then separated from the mash before fermentation.

They close at 6:00pm, and again it was after that – but the front doors were still unlocked and suddenly a family group of 15 German tourists filled the tasting area. We told Ramón that he should attend to them because we are only two, and we have many more questions! So back we went to the tasting room!

As we tasted, we talked about how the wines were made. One of the important things that we learned was about the labeling laws in the area. For instance, to put the name of a grape varietal on the bottle, say Merlot, it only needs to have 85% of the grape inside! We found this extremely Interesting as now we are going to try and find out who produces 100% Merlot, and who makes a “blend,” and how that might contribute to why sometimes we can’t identify a Merlot wine right off. Possibly this is more specifically important to the native grapes on Mallorca, as some are difficult to create strong mono-varietal wines from, and hence many Mallorcan winemakers create blends to get the colors and flavors they want. Looking forward to trying some Prensal Blanc, Manto Negro, and Callet mono varietals =).

The group of German tourists bought two cases. We were thankful because we are all about education right now and not bulk purchasing. We did buy two bottles before we left, but we felt like that serendipity group paid for Ramón’s staying late with us on a Friday night, AGAIN.

And we look forward to coming back and finishing that production facility tour someday!

How to get there:
Leaving Inca direction Sineu it is 4.1 km on your right. It is also easily located as it is across the Inca-Sineu road from the train station Enllaç.